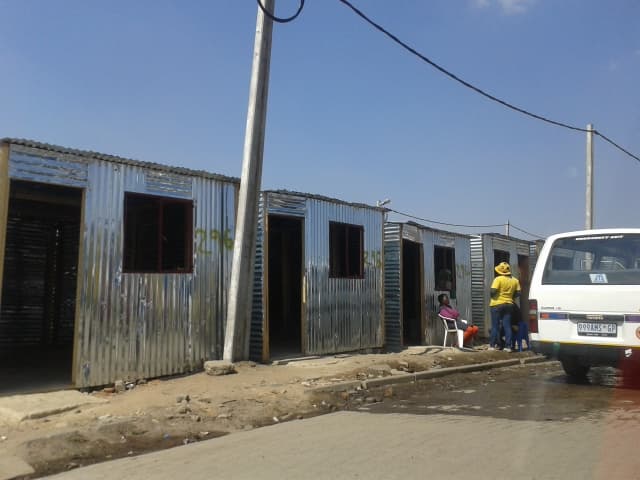 Esther Chunga and Thandiwe Khumalo sat with *Rutendo outside her tiny shack in Alexandra township in Johannesburg.

Sitting on buckets and crates they watched a funeral procession in the distance.

A tearful and heavily pregnant Rutendo talked about how she wanted to abort her almost full‐term baby and end her own life too.

Esther and Thandiwe are both from the Ububele Educational and Psychotherapy Trust, a non‐governmental organisation working in Alexandra.

Its programmes for children, parents and other caregivers focus on improving the emotional development and wellbeing of children under seven.

Thandiwe isan Early Childhood Community Practitioner at Ububele. Part of her role is to visit pregnant women and mothers with newborn babies and help prepare them for the birth, work through their feelings about their baby, bond with the child, and assist with any difficulties.

It was on her way to a home visit that Thandiwe had seen the heavily pregnant Rutendo sobbing in the street. In talking to her, it emerged that Rutendo had been beaten up and kicked out of the house by her husband.

Thandiwe promptly started home visits with Rutendo. When she realised that the 21‐year‐old mother was suffering from depression to the point of being a suicide risk, psychologist Esther joined her on visits. A life of trauma Rutendo had suffered a lot of trauma in her life.

As a 10‐year‐old she found her mother’s lifeless body hanging from a tree. Struggling with HIV and mental health issues, she had committed suicide.

Later in life, Rutendo lost her first child. Esther relays Rutendo’s story: “Rutendo lived in rural Zimbabwe. One day she was out ploughing a field while her four‐month‐old daughter was cared for by an aunt. She got home and her baby was struggling to breathe, so she rushed her to the hospital. Her baby was strapped on her back in the taxi when a fellow passenger told her that her child was already dead.”

Not long after her baby’s death, Rutendo married and moved to South Africa with another man, and soon fell pregnant. Her husband frequently beat and raped her, left her alone at home for days at a time, didn’t buy food and drank heavily. “By the time we met Rutendo she was very depressed, desperate and suicidal. She didn’t know if she wanted this baby because of the loss of her previous child and the situation with her husband. She didn’t see a way out,” says Esther.

She didn’t know how she’d be able to provide anything physically or emotionally for the baby. She was also very lonely. She had no one to support her and very few resources.

Empowerment through therapy About two months after Rutendo first came into contact with Ububele, her baby daughter *Nyasha was born. Thandiwe and Esther continued with weekly visits for ten months ‐ until they were confident that she didn’t need support anymore. “Rutendo became really empowered,” explains Esther.

“She reported her husband to his father and to the police, something she had not she could do before. His father reprimanded him and eventually the physical abuse stopped, although the relationship is still cold and unloving. Rutendo found a job which makes her less dependent on him. She has decided to leave her husband and move back to Zimbabwe to live with his family, where she’ll be protected from him, while giving Nyasha a family.”

Most amazingly, Rutendo developed a special bond with Nyasha, the baby she didn’t want to have. “She was such an attuned mother,” say Esther. “She was sensitive towards Nyasha and would think about her feelings. And Nyasha was a healthy, lively girl who was growing so well and had such a healthy attachment with her mom.”

Over time, the Ububele team noticed that Rutendo’s tiny shack had been taken over by baby things. She decorated the walls with anything baby‐related, even Pampers and milk formula posters. “Rutendo said her hope for Nyasha was that she’d be well educated and have better opportunities than she’d had.”

It became clear that, through therapy and support,Rutendo dealt with her emotions in ways that her own mother couldn’t. “Her ability to deal with her experiences potentially saved her life,” said Esther.

It’s not often that Esther and Thandiwe get to see how their interventions end. “The end to our relationships with the people we work with are often very abrupt because they move or just stop coming. It’s really amazing to see a process through from the beginning to the end and see growth and real change,” says Esther.

Ububele interventions Esther explains how the home visits and parent‐Infant psychotherapy work. “The home visits are quite structured. Home visitors visit a mom four times before the baby is born to help her think about the baby, her expectations, and to see if she’s already bonding with the baby. It prepares her for what’s coming.”

Once the baby is born, ten more visits show the mom how intentional and social babies are, and help parents become attuned to their baby. “Some of the visits are just to check in on the mom and make sure she’s doing okay and has the support she needs.”

It’s when the home visitor feels that the mother is a suicide risk, has experienced a high level of trauma, or isn’t bonding with her baby that they’ll get a psychologist to join them on their visits.

This is where Ububele’s overlapping services are instrumental to providing the most appropriate support possible. “Those sessions are less structured and more therapeutic,” explains Esther.

“We assess the risk and refer the mom to a psychiatrist if necessary. We explore their history.

With Rutendo, we helped her to mourn the loss of her first baby ‐ something she had never done. We also looked at how she was parented and how that affected the way that she looked after her own child.”

Without this intervention there was a strong possibility that Rutendo would have ended her life and that of her baby. “At best, if she had kept the baby and hadn’t had therapy, the baby would’ve grown up with a very depressed mom and little attachment. This would’ve affected Nyasha as an adult.

She likely wouldn’t be able to form healthy relationships with other people,” says Esther. With Ububele’s interventions, both Nyasha and Rutendo have an opportunity to break free from a cycle of depression, detachment and despair – which affects their lives and those of everyone they have a relationship with.